It was the fastest selling show in CPW History and a sold venue witnessed the biggest match in CPW History as CPW presented the Elimination 2019 show featuring the first ever CPW Prison matches, Natalie Wild vs Nightshade and the annual Elimination match and you can re live the magic from this Wednesday via CPW
Read More

Escapes and Entrapment. CPW Elimination Hello there once again CPW Galaxy, it’s time to give my own personal account of what happened for the show on 23rd of February at the Henley Green Community Centre, It’s Elimination. In front of a sold out crowd of around we witnessed one of the grandest spectacles in the
Read More 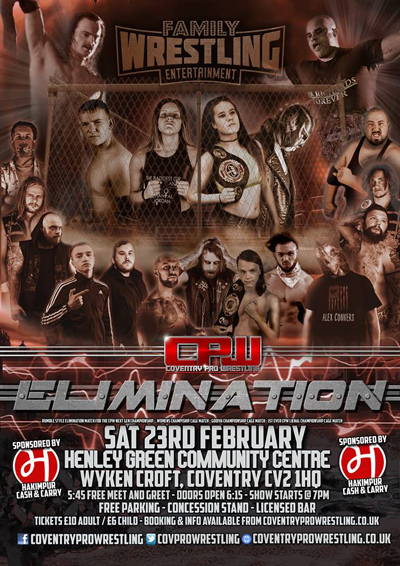 Breaking News……. Natalie Wild face Nightshade in the Quarter Finals of the Queen Of The Galaxy tournament LIVE at the Elimination show!!!
Read More

The biggest show of 2019 is just around the corner as the CPW Primetime Wrestling and NextGen Wrestling stars come together for a HUGE night of family entertainment For the first time ever the CPW Prison will be utilised as 3 blockbuster matches will take place inside the structure including: Mr Richards vs Will Starr
Read More
Privacy & Cookies: This site uses cookies. By continuing to use this website, you agree to their use.
To find out more, including how to control cookies, see here: Cookie Policy