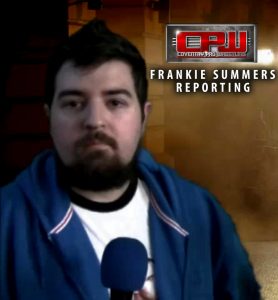 Hello to you CPW Galaxy, it’s Frankie here again with my sum up of the fun day show for July. It was a hot and sunny day for my first ever outdoor show that took place at the park at Manor Farm, in the basketball court, about half a mile away from our base at the Performance Centre. There were chairty stalls and refreshments surrounding the area and the bouncy castles supplied by our good friend Simon who helps us transport the ring from area to area.

I was given a job to do on the day, and that was to be the bell handler and timekeeper. I got a bit sunburned while I was out there, but it was fun to observe from the sideline and still have a part in what was going on. It meant I had to pay extra attention to what was going on in the match, so I could ring the bell at the right times.

Originally it was meant to be a 5 match card, but we managed to work some magic and squeeze in an extra bonus match for you, that started at the top of the show. Dominic DeWinter came out as our master of ceremonies and announced the first match, and brought Stevie the ref out as the official who was all ready to call this opening match. It turns out that it was a match to decide the Nextgen Championship match being held by Sir Fancypants himself Isaac Quentin III. Steve was then told by Dominic that there was a random generator used to decided Isaac’s opponent for the day and Stevie had drawn the short straw. So now, making his in ring professional Wrestling debut, is Stevie W against the undefeated Nextgen Champion, and the title was on the line.

In short this match was not pretty, with Isaac asserting his dominance right away, grappling with Stevie and throwing him around, with headlock takedowns and hip tosses, and a couple of weardown holds. However Isaac got too complacent and Stevie too the advantage after a move to the corner didn’t go to plan, he started firing back, but his momentum was soon stopped, this went a bit back and forth and ended with Isaac hitting his neckbreaker finisher and getting the pin. Still a good showing by Stevie and I hope we see him wrestle more again soon.

Now onto the billed show, and I’ll try and keep these brief this time. Next was Bashby facing his brother Bob Bashby who has taken a different path after History. An amendment however, Bob actually did the Samoan Drop on Kieran Young, not on George. So all I can say is that I’m sorry Bob, I’ll have to take a memo as I’m watching more matches.

Bashby came out, shooting his mouth off as normal, but with a more angry demeanour than normal. Then Bob came out, a lot more pensive than usual. Usually he strides out with confidence but the thought of having to wrestle his own brother still got to him a lot as you see him slowly and relucantly walk to the ring. For most of this match, it was all Bashby as Bob just didn’t want to fight, pleading with his brother to stop this madness. Bashby was having none of it however, with repeated slaps and cheap shots to demoralise Bob, all the time yelling to never touch him, or tell him what to do again. In the end, Bob had had enough. First he hit back a couple of times, but got caught with another cheap hit, then followed up by a spear into the corner. This time he charged out and just about took Bashby’s head off with a clothesline, turning him inside out almost. After giving some payback for what’s happened, the fight ended up in the corner, to which Bashby tripped Bob up, hooked the ropes with his legs and left arm and got the pin for 3.

You can tell that Bob wasn’t into this match from the off and Bashby took advantage of that, but we can’t blame Bob for what happened, how would most of us feel when put into a situation like this with a member of out family that we really care about?

Either way, moving on, it was Alex Conners against a new hot favourite, Man Like Dereiss, who has been making waves in CPW since his debut against Shaun Ruben. Now Alex has been feeling smug since winning back the services of Eli and his win at History V, but can he overcome this impressive newcomer? Before this match started Alex and Eli actually started off by coming over to me at my kind of commentary box and started hassling me. Sure I get Eli a shove to show I mean business, but still, your beef is in the ring, not with the guy ringing the bell. As I said to hit, get in the ring or go back to the swamp.

Well it started off with some basic grappling, which Dereiss got the better of in the end, leaving Alex sprawling on the floor in anger, then a near fall on Alex after Dereiss hit him with the shoulder tackle, but after retaliation from Alex, he got Dereiss in the corner and started choking him out while stood on the turnbuckle. A bit more clubbing, which then lead to Conners hitting Dereiss with that devastating pumphandle backbreaker. He left it too long however as Dereiss got his wind back very quickly., firing back with some clotheslines.

After this Dereiss hit Alex with a vertical suplex which worried big Eli. Who jumped onto the apron and he got a forearm for his trouble. Alex took advantage and took Dereiss down again, but only got 2 on the pin attempt. Not long after Dereiss lifted all 230lbs of Alex up in the firemans carry, slammed him down and got the 3. The crowd went ballistic to see Dereiss finally get his first win in CPW, and against such a formidable and notorious opponent. Let’s hope these winning ways carry on as I see a bright future for Dereiss in CPW, as he is just that good in the ring.

Next was a debut as Drake Wynter took on Danny O’Neil. Danny was a bit deflated after the events of History, but he wasn’t going to let this affect him against a brand new opponent here in CPW. I don’t know that much about Drake but I know he has been wrestling for a long time all over the Midlands scene, and don’t let his look fool you, he’s experienced and strong and pretty ruthless.

He showed this right from the off as he outgrappled Danny, threw him around and got an early pin attempt in, taking advantage of Danny’s hurt psyche. Danny fired back however, but was cut off numerous times, partly with cheap roughnecking and the other with power, including a lead up to a big running knee in the corner from Drake. Danny got his wind back however and turned the tide. He hit Drake with a chain of moves, went to power him up, but Drake countered, Danny then snatched back the momentum, booted Drake in the mid section, hit the double arm DDT to win the match. Impressive showing from both men, and I hope we see Drake back in CPW to see what he can do against some other opponents.

Next was a match I was certainly looking forward to as the now bad Eli Conners squares off against the natural born outlaw Morris. Morris has a renewed sense of vigour after ending his losing ways by smashing through Shaun Ruben in the 6 man tag at History, so both men are riding high, let’s break it down. Before the match those two hicks had a run in with Dominic, who kicked the chicken off the ring steps which Alex of course took exception to. Only thing is only I saw it, but I got , shall we say, a kick out of it.

It started out with the power game that Eli won early on, but then Morris fired back with some strikes and quickly took the advantage, hitting Eli with the tackle, which cause Eli to retreat outside to the safety of Alex. After he regained his composure it was mainly brawling. Morris tried to take control with a slam, but couldn’t lift Eli, to which Eli took advantage, knocked down Morris, and started wearing him down with ground holds. Morris broke out and fired back with more running moves and strikes, Eli countered again and took him down once more. It all started up again and this time Alex tried to interfere. Eli was almost knocked into him. Then Morris shoved Eli into Alex, knocking him out of the equation, and then muscled up all 255lbs of Eli and flattened him with the Wasteland, getting with win. That puts Morris at 2 in a row for wins now, with no signs of stopping. So the Hillbillies walk away being given 2 big losses, but they’re always lurking ready to peck out our souls.

Lastly we got to the match between the two main CPW trainers as the treachorous heartthrob Justin Joy takes on the Chosen One Will Starr. As we know, Justin has had a change of heart recently after losing the tag team championships to the Merseyside Murder Squad, Will however, has become just more intense since losing to Isaac Quentin III after letting him get into his head in the British Rules match at History V where Will got himself disqualified.

This one opened with grappling as it to be expected as both of these guys are very hot in the technical department. It started up with Justin not really wanting much of Will, to coincide with this weasely new persona of his, but once he came to it, it was see saw all the way through, both men jostling for position, reversals and standing switches and ground wear down moves. A masterclass in, I would say British, but it’s really European chain wrestling considering Justin here. The match kept going on, and after Justin couldn’t get a pin on Will, he escaped the ring. Dominic hopped over Justin and yelled at him to get back in the ring or face indefinite suspension. Justin still left and Dale called for the bell, which I rung of course. This declared Will Starr the winner by count-out. Not a decisive ending, but once we see if they will keep Justin in CPW due to his actions. If he’s kept on, then I’m sure we will see these two fight again.

Considering this was a free show that we put on in a basketball court in a park, on a 28 degree day, we put on a pretty impressive show with 6 solid matches from Coventry’s (and local surrounding areas) best. We proved that we didn’t need any additional people, or to pull in ones from elsewhere. We put on some great matches with great results for the fans and it’s not the end. We have Summerfest 3 coming up so keep your eyes open for that.

Thank you once again for your time, the next feature will be about the media day at Birmingham which had a happening that I must talk about it.

This is Frankie Summers signing off.